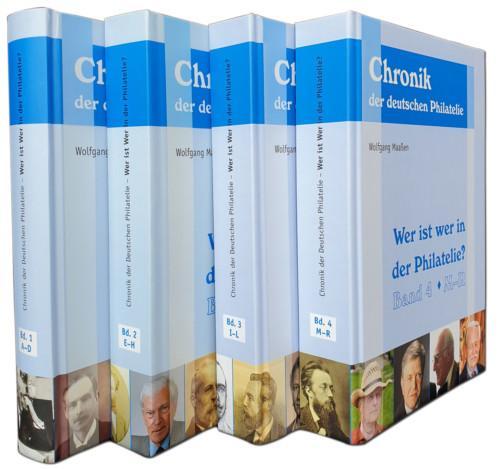 13 years ago, the 3rd edition of the first volume of this unique collection of biographical data on former and current renowned philatelists was published, and one year ago volume 4 with the letters “M-R”. Each volume was written by Wolfgang Maassen and published in the book series “Chronik der deutschen Philatelie” by the Schwalmtaler Phil*Creativ Verlag. Several thousand biographical entries, some of them several pages long, have already been published on around 1,200 pages so far. Now the publisher announces that two more volumes (instead of the originally planned last volume) will be published in autumn 2022: Volume 5 (letter “S”) with about 330 pages and Volume 6 (letters “T-Z) with a similar scope. The complete work is thus considered finished for the time being and should then number around 2,000 pages. Whereby ‘completed’ is probably only meant to be ‘preliminary’. On the one hand, there are always new names that are still missing, and on the other hand, the volumes have been significantly expanded by the inclusion of new people.

Thus, for the first time in volumes 5 and 6, the stamp artists (designers, engravers, etc.) from the German-speaking countries have been included, most of them edited by Wolfgang Schneider. The early philatelists were also given much more attention than before – thanks to the research of Hans-Peter Garcarek. The complete work has been entered for the IBRA 2023 literature competition. It is probably unique in its kind worldwide and thus represents the largest compendium of biographical-historical portraits. Even though the book is published exclusively in German, it has become an indispensable reference for anyone interested in the history of Philately.