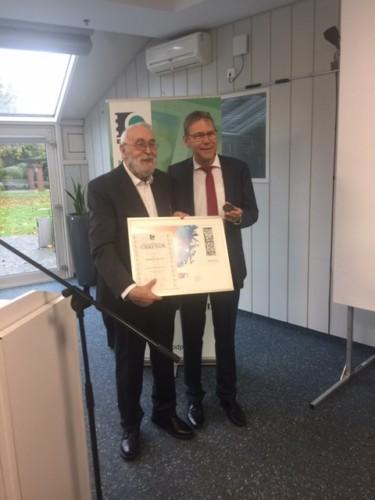 At the anniversary celebration of the BDPh in Bonn on 7 November, BDPh President Alfred Schmidt awarded Wolfgang Maassen the Association’s Medal of Honour, the highest distinction the Association has to bestow. The Medal of Honour recognises personalities within, but also outside the BDPh, who have rendered outstanding services to the promotion of German philately. In his justification, Schmidt indicated that this had been the case in a special way with this year’s awardee. Not only through his almost 28 years as editor-in-chief of “philatelie”, which he developed into one of the best specialist journals in Europe, but also through his countless specialist articles and books, which he wrote himself or supervised for third parties.

Maassen ‘returned the favour’. Not only with his new 630-page book on the last 25 years of the association, but also with a 45-minute celebratory lecture in which he characterised the history of the BDPh from 1946 with its ups and downs. The lecture will be published in PHILA HISTORICA, No. 4/2021 at the end of the year. Downloadable free of charge from www.philahistorica.de

← The Sindelfingen Fair to be closed! The “end” for the International Stamp Fair? LONDON 2022: COVID-Update →