Hans-Werner Salzmann is a philatelic all-round man: collector since his earliest youth, exhibitor, juror for thematic as well as postal history collections, club and association official, organiser of exhibitions, head of the “Brandenburg Gate” study group in the Berlin Research Group, and also an author for some years now on top of all that. In this respect, he has demonstrated a flair for opening up new philatelic territory. For his book Militärsanitäts-dienstliche Aktivitäten in Berlin 1870-1945, FEPA presented him with a certificate of appreciation in 2019.

During a visit to the unique Museum of Taxes in Jerusalem a few years ago, he discovered fiscal philately and was fascinated. After a closer look at the collecting field, France with its variety of different revenue stamps, uses and rates particularly did it for him. He set up several exhibits and found out that – apart from a catalogue of fiscal stamps by Yvert – there was very little literature available on the subject. The author now attempts to fill this gap a little with his seventh work under the charming title “Your identity card, please!”. In it, he presents a documentation of the French identity card system.

Very informative and well-illustrated explanations of the terms form / document, stamped paper and fiscal marks start the book. The first main chapter then deals with travel documents in an overview of their development from the 18th century to the present. The historical background is skilfully incorporated into the chronological presentation, and where possible, reference is made to the respective decree. The passe-port – from which we derive our name passport – is initially an often quite large form sheet with a handwritten entry of the traveller’s name, supplemented by a precise description of the person. The document, issued for a one-time change of location, also records the exact itinerary. The fee for issuing the document is usually indicated by a wet stamp mark. From about the end of the 19th century, the large formats give way to more manageable single-sheet forms. After the turn of the century, the passports, which are now valid for one year, bear a photograph of the holder, first optionally, then obligatorily, and the fee is now shown in the form of an imprinted value stamp. Fiscal stamps are affixed when passports are renewed or in the event of fee increases. The so-called Nansen passport is a special form of passport: it is introduced after the First World War for refugees and stateless persons and uses its own vignettes. – However, the single-sheet form proved impractical for multiple journeys. Therefore, from 1910 onwards, the passport is issued in the form of a booklet – in French carnet – initially with 16 or 24 and from 1930 onwards finally 32 pages. This brought it up to the European standard. From then on, the fees were generally paid by means of fiscal stamps. In a separate subchapter, Salzmann deals with visa endorsements in foreign passports, and in an additional chapter he devotes himself to the permits required for a single journey.

The second main chapter focuses on the identity card. It became compulsory for foreigners in 1917 and was introduced by its initiators primarily with the intention of fighting crime. French citizens did not have to carry the identity card until 1940 under the Vichy government; for citizens of the Mosaic faith it contained a thick, conspicuous stamp JUIF or JUIVE (Jew).

The final chapter presents identity cards required by special groups of people: temporary residence permits of various kinds, refugee identity cards, identity cards for sales representatives and commercial travellers, foreign industrial workers, etc. The boundaries between the different categories of identity cards are fluid, especially as the French terms are not used in a clearly defined way. A work pass, for example, is just as much a carte d’identité (identity card) as a permis de séjour (residence permit) or a Nansen pass.

In chapter 2, inconsistencies in the chapter references are noticeable in the headers; rather embarrassing is the consistent laisses-passer error. These are forgivable blemishes. They in no way detract from the lasting overall impression of the overwhelming breadth and depth of more than 600 documents – 90% from Salzmann’s own collection – which he is able to present and competently explain. The abundance of documents and their meticulous description probably also impressed the jurors of the Multilateral St. Pölten 2021, who awarded the work a Grand Gold Medal.

Identity cards bearing revenue stamps or cancels are, after all, only one aspect of French fiscal philately. Consequently, Salzmann is already working on an additional volume for all the areas not covered in the present publication, which he announces for the coming year. We are waiting to be surprised! 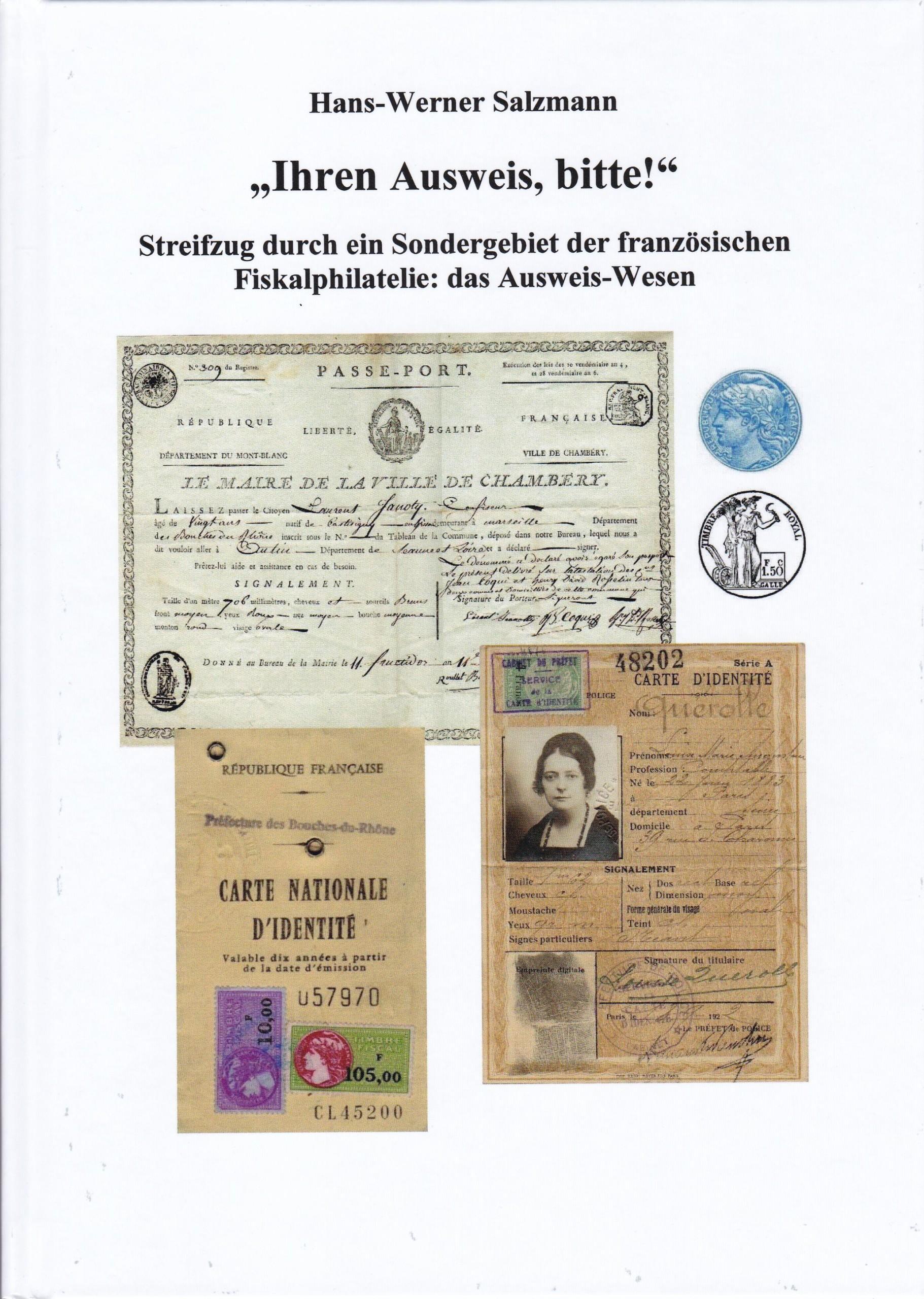