The President of North Macedonia’s Parliament, Mr. Telat Xhafri, said the following about the papal postage stamp: ‘Even though we have a small territory and a modest number of inhabitants, we have a lot to offer to build a more beautiful world for everyone. An exclusive example for this is Gonxhe Bojaxhiu, the saint Mother Theresa, who tirelessly gave herself and her whole being to comfort the poor, the disabled, the sick.’ To this, the Director of the North Macedonian Post, Mr. Ejup Rustemi, added: ‘Postage stamps place their stamp on many events of prominent personalities. Precisely because of this I hope that the postage stamp dedicated to Pope Francis’s first visit to our country will take its deserved place in philately and in the hearts of people, regardless of where they come from and to which religious community they belong to. [..] I express my gratitude to the State and the North Macedonian Post for marking this great historical event with a postage stamp dedicated to Pope Francis, the missionary of love and peace among peoples and nations all over the world. 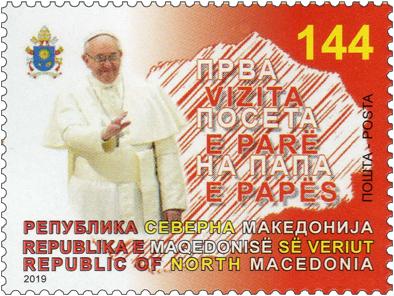 ← Info Bulletin #1 for NAPOSTA 2020 now available! Literature Exhibition in the Republic of Moldova →