For the Dutch National Exhibition ‘Gouda 2019’ (17-20 April) Dutch post (PostNL) has produced special coil boxes with personalised stamps. The stamps will be supplied free of charge, along with the exhibition catalogue. Because a first edition of the stamp this was completely rejected, a new, trial edition of just one box containing 100 stamps has been produced. Only after that, then the entire edition of 24 boxes was produced.

The sample box has a different production number than the other boxes, which all have the same number. Probably because the first order was rejected, the production of the test roll and the 24 other rolls took place outside the web application, hence the different number.

The test box will be auctioned by the main sponsor of the exhibition, Corinphila Veilingen. The entire proceed will be donated to the Voedselbank (Food Bank) in Gouda. The starting price of the box, that contains 100 personal stamps with the inscription ‘NEDERLAND 1’, is € 100. Bids can be made in writing, either directly to the address of Corinphila (closing date: 15 April) or at the exhibition in the Corinphila booth, or the booth oft he exhibition organisators; this is possible until Friday 19 April 16.00 hours. The same evening the box will be sold by auctioneer Nathan Bouscher during the festive palmarès. The box will be delivered on Saturday, April 20, 16.00 hours in the exhibition venue, sports centre ‘De Mammoet’ in Gouda. It can als be delivered by post against shipping costs. 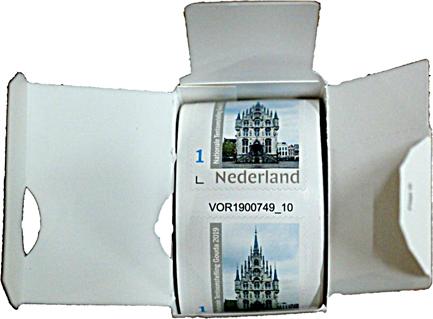