(ok/pcp-wm) MICHEL Südosteuropa 2019/2020 is another volume produced with the new Philatelic Database (PDB). On the outside you can see the change in the revised layout.

This is noticeable, for example, in the column titles (the headers on each page). They now consist of the abbreviation of an area as used by MICHEL in all its products. It then follows the country and the subarea if one is affected. So now you read “Turkey official stamps” and no longer just “Turkey” without specifying the subarea. Finally, there is the year of issue (in brackets) with which one page ends. Therefore the previous year bars were given up, since the year of issue is now on each page and is no longer indicated only after several pages.

Also the headings of the secondary areas are indicated more clearly, the structuring of individual areas was also improved. Moreover , there are many more details in the description of the individual stamp issues.

The editorial processing is spread over the entire work. New information can be found in many places in the new volume. Particularly to mention is e.g. Bulgaria, where many, also modern block editions were subdivided after types. There are newly recorded varieties particularly in Romania, which opens new possibilities for the collector for the development of his collection.

Greece, but also related areas like Samos or Thrace are characterized by higher valuations, which concern particularly the time after the First World War. This was a time of alteration in the southern Balkans and also of many territorial changes. Those stamps are now sought by collectors.
The catalogue is published in 104th edition, with hardcover and 1 376 pages, about 19 000 illustrations and about 74 000 price quotations. It will be available in bookshops and specialist shops from 27 September 2019 at a price of 74 euros. ISBN 978-3-95402-971-6 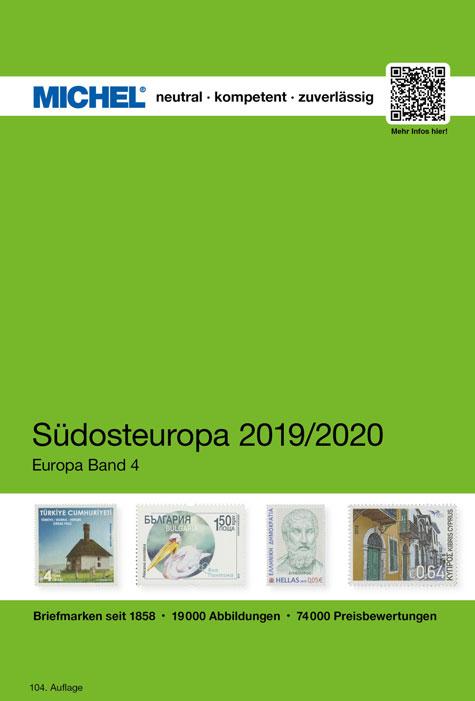