(wm) The official journal of the Greek Philatelic Society, ‘Philotelia’, was founded in 1924 and is one of the oldest in the country. It is published every two months and since the first issue the main articles have also been published in English and/or French, since 1984 only in English. This high-quality journal is known for its first-class research contributions, which often appeared separately as reprints.

In addition to the research articles that make up the majority of the journal, the sections on association life, important philatelic news from home and abroad, news from Greece and Cyprus, special cancellations and the presentation of new philatelic literature are also maintained. Each issue has 64 pages, 16 of which are in colour. Since its inception, the magazine has been awarded more than 100 medals at international exhibitions and has also received high honours from renowned associations and institutions.

Thanks to the support of the Historical Archives of the National Bank of Greece, it was possible to completely scan the volumes from 1924 to 2001; the volumes 2002 to 2017 were already available as pdf files in complete colour design, so that now another philatelic journal is available to all interested parties completely in digital form. The text is fully searchable and files include the five volumes of the journal’s cumulative indexes for the years 1924-2008.

The complete journal, spanning a period of 95 years(!) is now available on a USB stick at a price of 100 Euro plus postage. Information and orders: info@hps.gr 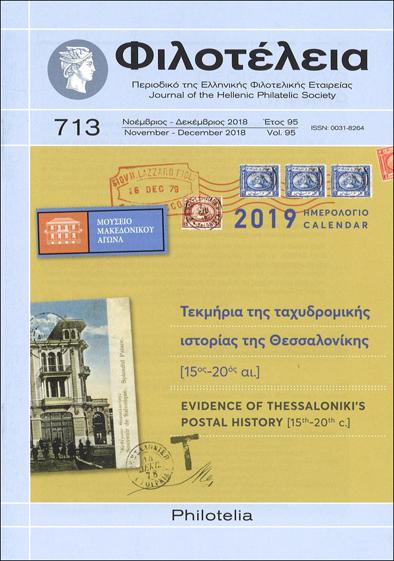