(pcp-wm) It was long overdue, because the FIP’s current rules and regulations still came from the “stone age”. It was adopted in 1985 – 35 years ago! – at the FIP Congress in Rome.

Also with a view to the now widespread use of digital literature, last autumn the FIP Commission for Philatelic Literature set itself the task of revising these outdated regulations. It was also necessary to integrate newly added types of literature (e.g. documentary or advertising literature), but also to rewrite the term “literature”.

In this bilingual (English/German) brochure, worth reading, Wolfgang Maassen, member of the Executive Committee of the FIP Commission and President of the AIJP, presents the old and, in comparison, the new regulations, which will be submitted to the FIP for adoption at the next possible date. This documentation is supplemented by a new draft of the guidelines for the assessment of philatelic literature, which is primarily aimed at jurors, but is also of great importance for the authors and publishers of philatelic literature.

Originally, the new draft was scheduled for adoption during LONDON 2020. Now this can be done at the earliest during the FIP exhibition in Jakarta 2020 or only after that. Irrespective of when the final decision will be made, this brochure offers valuable information that can be of benefit to all those working in the field of literature, but also to all jurors.

The brochure was published in the AIJP publication series as issue no. 6, comprises 60 pages and can be ordered for 10 Euro / 10 US-$ / 10 £ incl. postage from the General Secretary of the AIJP, Rainer von Scharpen, Tucholskyweg 5, 55127 Mainz, Germany, e-mail Rainervonscharpen@t-online.de. 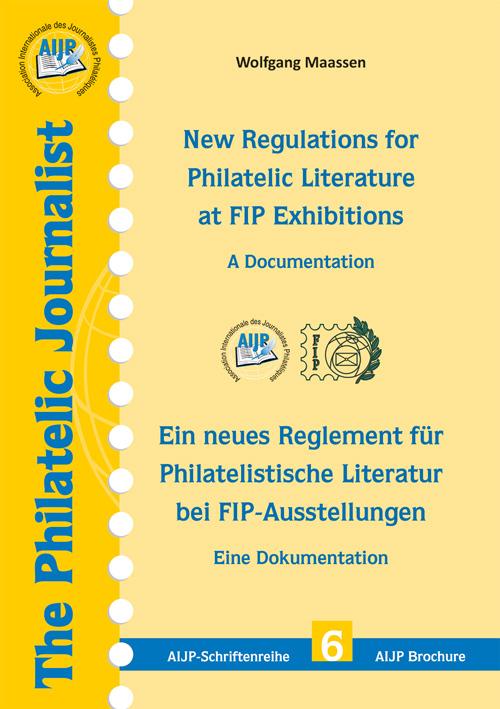 ← LONDON 2020: Exhibition Dates Iran honours its heroes in the fight against Corona - With a stamp →