Philatelic Portrait of the City

During a bombing raid in 1941 on the club’s premises in the Haus Germania, all the files of the Aachen Stamp Club were burnt, and as a result the first fifty years of the club’s history can only be documented incompletely. So it is all the more gratifying that the “BDPh home photographer” Wilhelm van Loo took advantage of the inevitable Corona break to compile a loose chronicle of philatelic life in the city of Charlemagne. Many an unknown detail is included in his witty comments.

With its 130 years, the Aachener Briefmarkenfreunde is one of the Republic’s senior philatelic societies. The twelve founding members gave themselves the name Aachener Briefmarkensammler-Verein (Aachen Stamp Collectors’ Association) in March 1890 in the Hotel Fasshauer, later the Vier Jahreszeiten. In 1896, this became one of the 55 founders of the Federation of German and Austrian Philatelic Societies, which had convened in Cologne for its constituent meeting. Theodor Haas, in his 1905 Lehrbuch der Briefmarkenkunde [Manual of Philately], listed among others “some of the better known clubs of modern times” and included the Aachen club among them. As of 1938, when all philatelic clubs in the German Reich were forced into the Kraft durch Freude (KdF) Community, the Aacheners used the name Briefmarkengilde Aachen. The current name was adopted in 1951, but the club was not entered in the register of clubs until 1960. – As the name changed, so did the club’s premises, but they always met near the theatre.

The association repeatedly made a public appearance with stamp exhibitions, the first in 1930 on the occasion of the 40th anniversary of the association. Several more exhibitions followed, from 1960 to 2003 in a five-year rhythm. The highlight of the association’s history, however, was probably the organisation of the 34th Federal Convention of the BDPh in conjunction with the three-day 81st German Philatelists’ Day in 1980, when even the shop windows of the department stores got residents and visitors in the mood for the great event. BDPh President Dr. Heinz Jäger placed his ceremonial address under the motto: Wider den tierischen Ernst in der Philatelie [Against the beastly seriousness in philately]. The UN Postal Administration was also involved at the occasion and presented a White Card.

The association regularly accompanied anniversaries, festivities and special events with special postmarks: 10 and 50 years of twinning with Reims, the 1979 Shrine Tour, the awarding of the Charlemagne Prize to Spain’s King Juan Carlos I in 1982, the historical fair, the annual CHIO equestrian tournaments, the opening of the Ludwig Forum Museum or aid for the maintenance of the cathedral are just a few of the occasions which the association promoted actively.

However, the philatelic landscape in Aachen was and still is shaped just as much by the stamp trade. Around 1900, no less than five dealers operated a shop in the city centre. Today, the auction house Aix-Phila is known beyond the national borders.

Van Loo has interspersed numerous photos “from the family album” between newspaper clippings, stamps related to Aachen, postmarks and medals, thus creating a varied, appealing kaleidoscope of the philatelic city of Aachen in the border triangle. 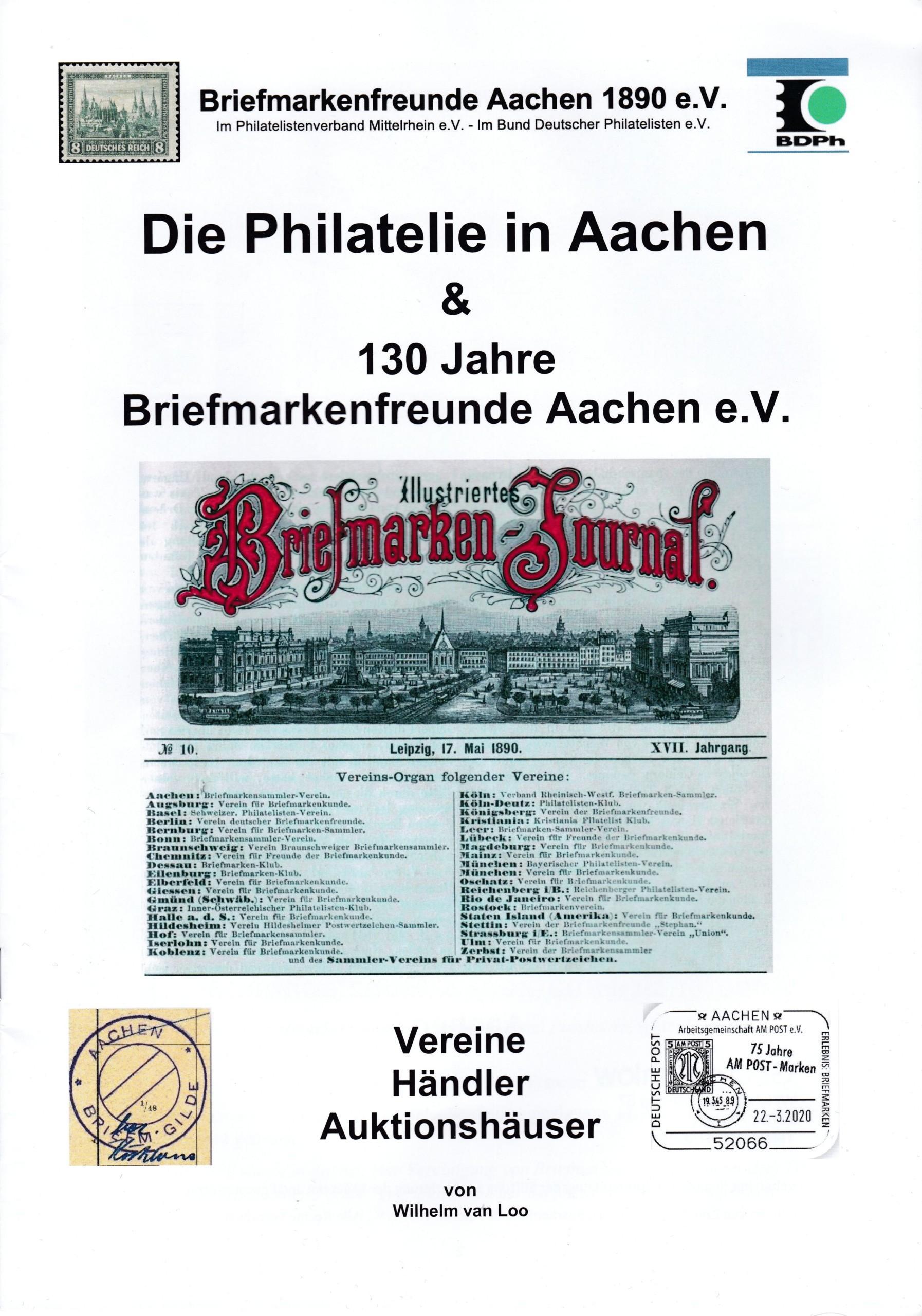