(ok/cj-pcp-wm) MICHEL Southern Europe 2019 contains the popular collection areas around the Adriatic with the Apennine Peninsula and the area of former Yugoslavia.

One of the last aftermath of the Balkan wars of the 1990s was the renaming of the “former Yugoslav Republic of Macedonia” as Northern Macedonia. MICHEL, of course, changes the name.

One focus was the review and updating of price quotations. There are many movements, perhaps particularly pronounced in Italy in the 1930s and around the turn of the millennium. The demand for interesting motif and postage stamp editions of Yugoslavia, Croatia and Serbia is reflected in their rising quotations.

Again numerous editorial changes and improvements were inserted. The sheet configurations of Albania illustrate which values of a set were additionally produced in individual sheets. In this way, the postal requirements can be perfectly documented. Additional editions of current Slovenian postage stamps appeared with differing perforations and were recorded. Yugoslavian FDCs were inserted. For a Montenegrin postage due stamp the official use as postage paid stamp could be proven. From Vatican City a rare watermark variant has to be reported for one block. And a perforation aberation of a stamp from Zone B of Trieste recorded for the first time values one hundred and twenty times higher than the standard mark.

Particularly noteworthy is the revised version of the Bosnian stamp booklets, which can now be found clearly inserted in the stamp section of the normal stamps. Price quotations have also been extended. In the future, readers will also find an evaluation of stamped stamps. Not to be forgotten is the inclusion of over 600 new MICHEL numbers. 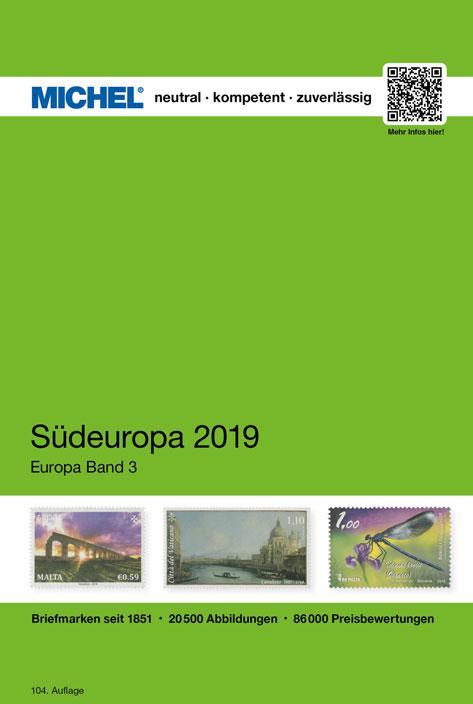