(wm) There are probably only a few post offices, if any, that can illustrate an story so unique as Dublin’s General Post Office. The office wrote philatelic history as early as 1899, when a real treasure of first editions of England – complete or partial sheets, essays and other previously unknown material – was found during the renovation of the offices. This legendary stamp find (later known as “the Dublin find”) today has an estimated worth of ten million euros. It was smuggled into the market in smaller lots and its history is now well documented.

Sixteen years later, during the equally legendary Easter Uprising on 24 April 1916, this headquarter of the Irish Post was the scene of a tragedy that not only destroyed large parts of the main post office, but also killed many people. Militant members of the Irish Volunteers Force and the Irish Citizen Army occupied the building and proclaimed the Republic of Ireland. The uprising was brutally suppressed by the British Army, which is commemorated in a museum within the post office that houses countless historical objects and documents. 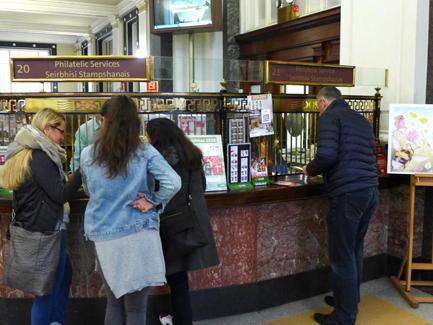 Consilium Philatelicum: An"oracle in the favourable sense of the word" makes place →