(wm) A pilot test with new automatic stamp vending machines (ATM’s) that German Post started on 21 December 2018 has been temporary halted. It concerns the cooperation between Deutsche Post and Postbank at five branch locations in Bonn and Cologne. The test was interrupted in January for technical reasons. Deutsche Post announced on 4 February 2019 that the trial will now be continued.
The new self-service terminals can be found on the following locations:

New ATM stamps will be available at the above terminals until March 2019; available are stamps of the following denominations: 0.45 €, 0.70 €, 0.85 €, 1.45 € and 2.60 €. For the first time, the German ATM stamps contain a digital franking code in addition to the classic picture motif and face in plain text. 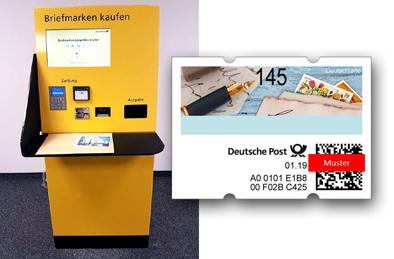